Elite Fleet Gets Off to A Flying Start!

The seemingly ever-growing Elite fleet has hit the ground running with two more new boats on the water for the 2022 season. A big warm welcome to the fleet for SPARKLES  (Andrew Courts & Bryan Haynes) and BLIND SQUIRREL (Bill & Sharon Blank) both of whom were already in for the first Wednesday night race last week, so well-done guys – great start! Congratulations also go to Neil Fulcher and team on ALL THE GEAR for taking the first Wednesday night honours of the season.

As the first Wednesday race finished, we were straight into the Easter Regatta, which was hotly contested over Good Friday, Saturday & Sunday. Again, a great effort by all the fleet for getting eight boats on the start line so early in the season. We couldn’t have wished for much better racing conditions for an Easter regatta and judging by the onshore laughter after each race I think we were all pleased we made the effort.

The final results for Easter were: 3rd place overall Neil Fulcher & team in ALL THE GEAR, the Hobday family in THE OUTLAW had a well fought second place on the last day which took them into second place overall.  First place overall, for the Karen Paddison Trophy, went to Richard Bavin, Duncan Haley, Jon Durbin & Joey Thompson (not all at once!) in SERIOUS MOONLIGHT.

These guys also snuck the newly awarded Patron’s Trophy for the Easter Saturday race in honour of our late Patron HRH Prince Philip. 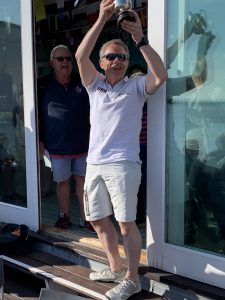 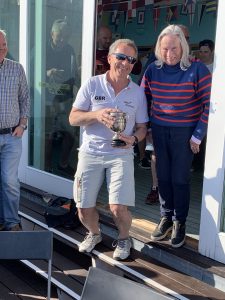 Big thanks as always to David & Alison Osborne and their Racebox team for great organisation and patience with our constant race time and course changing!