New Year’s Day 2022 dawned with fine weather from the outset but initially not the strong and gusty winds which had been forecast. At first there was hardly any wind but it had filled in well by the start, even though from a not very helpful southerly direction.

Two boats entered the cruiser race (MANTRA – Phil Harbott and JACKAL – Digger Harden). They were set a course off the mouth of the Roach starting from the Club line, with Jackal taking line honours and also winning on handicap.

The mainly southerly wind direction meant that the use of the Club line to start the half a dozen dinghies was abandoned in favour of a committee boat start and a figure of eight course. Line honours and victory on handicap went to Nic Tolhurst in a Blaze to take the Payne-James Trophy. Adam Prior was runner-up and Tye Wichard third, each in a Laser.

The impromptu decision to have a committee boat start meant that, in all the excitement, the race officer forgot to take a hooter on board. This resulted in some improvisation at the start, involving a mixture of whistle-blowing, shouting and arm-waving. The fleet seemed indulgent – and were well-behaved notwithstanding.

Thanks to the race team, which included Jack and Clifton Warry on SHIRAZ and Sally and Andy Wise on Sally’s RIB. Their involvement was crucial in order to give the dinghies a committee boat start and a decent course. The rest of the team consisted of regulars Alison Osborne, Roger Cockram, Fianne Stanford and Liz Wastnage.

Prize-giving took place in a sunny and cheery bar with Rear Commodore Duncan Haley presenting, making a delightful way to round off the resumption of this annual start-the-year event, which had to be cancelled during the lockdown this time last year. 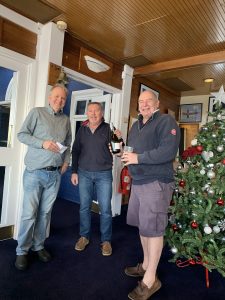