Six Dragons from the Burnham Fleet travelled to the River Medway to compete in the 2019 BDA East Coast Dragon Championship, with 15 entrants. The weekend’s racing was a sunny, light wind affair with fantastic autumnal sailing with only a few choosing to wear ‘oilies’.

In 2018, at home, the Burnham Fleet scooped all the silverware, so how much would be brought home this time? Following a brief but social raft up under AP, the event was underway. First to finish in Race One was team ‘Avalanche’, the Wades, Mark, Mandy, and James. A good start helped launch them to the front of the fleet in the first beat which proved to be decisive, as the course was shortened and finished after just one lap. Racing was then fairly brisk with Race Two initially lead again by ‘Avalanche’ followed closely by Vivacious (Dan, Harriet, Noddy). Their positions swapped when rounding the top mark in second place ‘Vivacious’ gybed and hoisted on port, which proved to be the better option than the bear away set by ‘Avalanche’. ‘Vivacious’ took Race Two. Race Three was won with a convincing performance from ‘Pageboy XI’ (Paul, Clive, Graeme) showing good speed and Paul using all of his river racing experience to pick the right lines. Taking Race Four was the sole visitor from the Solent Fleet ‘Badger’ with Tom Vernon, Adam Bowers and Ollie Spensley-Corfield – the team crowned South Coast Championship winners in Cowes just the weekend before.

At the end of day one, team ‘Badger’ were laying first ahead of Burnham team ‘Anarchy’ (Chip, Nic, Rob) in second place who had managed consistent results without a race win, and ‘Avalanche’ in third. Close on points behind the podium sitters were ‘Scorpio’ (Ian, Rene, Alex), ‘Vivacious’ and ‘Pageboy XI’. The Race Team had delivered four races in light winds so well done to them. They opted for a windward-leeward course with a single leeward mark instead of the more common ‘gate’ which did mean, downwind, there were not many options for boats to benefit on the right hand side of the course. A brief pontoon drink preceded a dinner in the MYC where the day’s prizes were presented by the MYC Commodore, Mark Penny.

Day two’s window for racing was narrow, with even lighter winds expected and an early cut off time to enable recovery of visiting boats. ‘Anarchy’ were the early pace setter for Race Five with a blinding port tack start alongside fellow Burnham boat ’Scorpio’, both crossing the advancing starboard fleet with plenty to spare and at the end of the beat headed to the north side of ‘Long Reach’, the race area. The following pack mostly opting for the south side. North paid allowing boats rounding mark one in the teens, to leap into the top five behind lead boat, ‘Anarchy’. One of the Northerners was ‘Whistle’, Quentin Strauss and crew Philip and Martin. After a penalty turn for touching a buoy ‘Whistle’ were the tail of the ‘Northerners’; however, they then sailed hardest left and overtook boats as they gybed late to approach the leeward rounding. Second time around, in the last third of the downwind leg with the whole fleet coming north, ‘Anarchy’ gybed onto Starboard early – they hadn’t noticed the gain made by ‘Whistle’ previously. ‘Badger’, who had seen the move by ‘Whistle’, held Port gybe longer and moved into the lead from third with a late gybe to Starboard. The decisive moment of the Championship maybe? Race Six and the wind was falling away. This time the leaders including ‘Anarchy’, ‘Badger’ and ‘Avalanche’ took a more central line downwind. ‘Whistle’ again went hard left but this time found a hole and were overtaken. To the south, Medway boat ‘Gandalf’ (Edwin, Ross, Phil) were bucking the trend and stole the show by rounding the leeward buoy from the right to take the race win. The series finished as it had begun, with a single lap race. 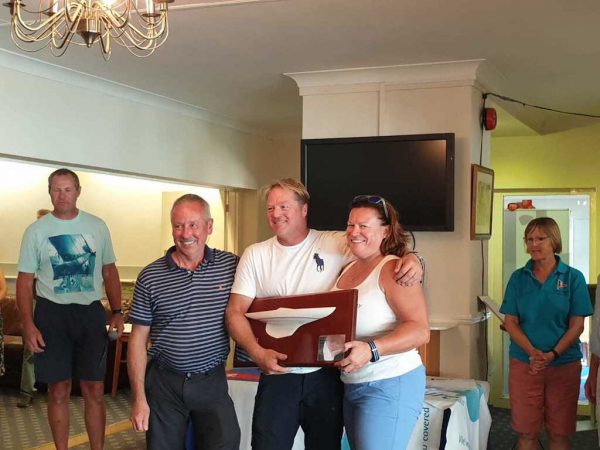